The Assassin is one of the playable classes in Crowfall. The Assassin underwent a lot of changes and now belongs to the many available classes in the game, after the concept of archetypes was abandoned by the Developers. With the massive reveal on May 18th, 2017, the Assassin now can be played by several races, too. 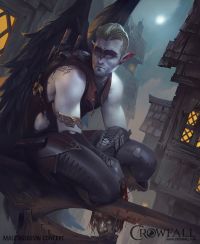 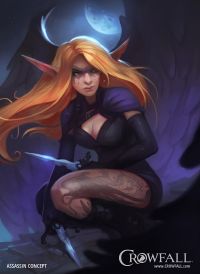 Not all Crows were heroes in life. Assassins ply a darker trade; sharp knives, deadly poisons and silent arrows are the tools they use to carve an inglorious role in history. Untrustworthy and ruthless, these dark mercenaries rarely travel in groups and begrudge military discipline – but their subtle skills are quite effective when it comes to toppling regimes and ending dynasties.

I had a brother, once… for a few minutes. I think I was born first?

The Farewell Kiss is swift and painless. We are not monsters, after all. No one needs to suffer.

Some mothers cry. Some plead for assistance. My mother did neither.

Men do not belong in the Riverlands…. not even the breeders. They are captured, they serve their purpose, and they are killed. Many treat their enemies less kindly, I think.

Think of the worst tyrant in history. How many lives could have been saved – how many wars averted – by a sharp blade, at the moment of his birth?

Why did I say HIS birth?

You know why. When I asked you to think of a tyrant, no woman crossed your mind. One life, for many. Quite the bargain, yes?

I say to you: the Hunger is not your enemy. Your enemy walks among you, charming and handsome, with a tongue full of lies.