The Cleric is one of the playable classes in Crowfall. The Cleric underwent a lot of changes and now belongs to the many available classes in the game, after the concept of archetypes was abandoned by the Developers. With the massive reveal on May 18th, 2017, the Cleric now can be played by several races, too. 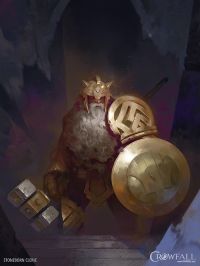 Concept of a Stoneborn Cleric

Clerics are known by many names in life: priests, prelates, bishops, pontiffs. Some follow a single god, but most are pantheistic, devoting their lives to the study and devotion of all of the gods and studying the language of the All-Father to lessen the pain and suffering of others. Most Clerics are also warriors by trade, knowing that the maelstrom of battle presents the best and most frequent opportunity to use their skills to the fullest. As Crows, Clerics spend the afterlife much as they lived, in the service of mankind and at the behest of one god -- or many.