The Duelist is one of the playable classes in Crowfall. The Duelist underwent a lot of changes and now belongs to the many available classes in the game, after the concept of archetypes was abandoned by the Developers. With the massive reveal on May 18th, 2017, the Duelist now can be played by several races, too. 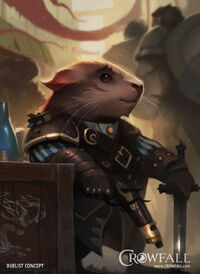 Aha! I see from your curious expression that you know not of my people. I take no offense!

I am Guinecean, of course! You have heard of us, yes?

The merchant families of Guinecea were the first to establish trade between Worlds. Our artist, the inventors of sculpture and stagecraft. Our duelist, the finest masters to wield a blade. Our engineers, the only to unlock the secret of munitions.

From your face, I see you doubt me. Surely, you jest!

No? Fine, I shall tell you of my people. Perhaps, then, you will understand.

In the Time before Time, my kind could not speak. We were a simple people.

Honest, yes. Hard-working, yes... but dim, like the beasts in the field.

One day, our eldest came upon a woman in the woods, her back against a tree. Her skin was pale as snow, her clothing matted with red and brown.

She died with her hand upon his head. In that moment, she gave him the Gift: knowledge, intelligence, speech. Not him alone. All of my people.

It is The Gift that you, also, possess. This Gift which was hers, and hers alone, to give.

Do you doubt my courage, friend? My sincerity? My loyalty? My prowess as a warrior?