High-Elfs in Crowfall belong to the playable Races, which were introduced alongside with the newly added Classes in the massive reveal on May 18th, 2017. The old Archetypes, which were presented earlier, became completely obsolete. 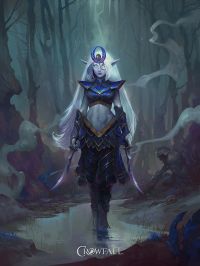 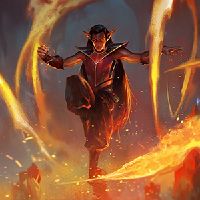 Bards sing of a once-great Elven house, said to be the First Kingdom, older even than the youngest of the gods. Every kingdom since has been a pale imitation fashioned in the memory of Aelfmuire.

Though long fallen, Aelfmuire stands throughout history as the pinnacle of learning, art, statecraft and magic. The kingdom and her people, were beautiful and cruel. Two elves ruled in Aelfmuire; a prince and princess who were brother and sister. It is said they convinced Malekai to teach them the language of the gods, the Songs of Creation and the Words of Power. In doing so, they gained mastery over the elements of fire and frost, and with this knowledge came a lust for power and this knowledge, never meant for mortals, split them asunder. The kingdom was broken and Aelfmuir was no more.

Sun-Elves, descendants of Prince Talem, worship fire. They resettled in the desert worlds that lie closest to the sun, building cities of stone and bone and sand. It is claimed that the Church of Fire stole the Songs of Creation from the Sun-Elves, and that they twisted these ancient rituals into mock-prayers to the god Arkon, Prince of Light. For this grave injustice, Sun-Elves hate all Humans and have sworn to destroy them as a race. In this hatred they are blind and do not differentiate between men of different nations or faiths.

Moon-Elves, scions of Princess Aleshi, worship frost. They left the ruins of Aelfmuir to settle in the frigid forest worlds that lie close to the moon. They have renounced the gods and seek to live in quiet solitude, away from the foolish conquests of men and the wicked machinations of their distant cousins.[1]

The High-Elf Racial Discipline applies the following effects to your Crow. High-Elfs are well versed in Jewelcrafting and Leatherworking 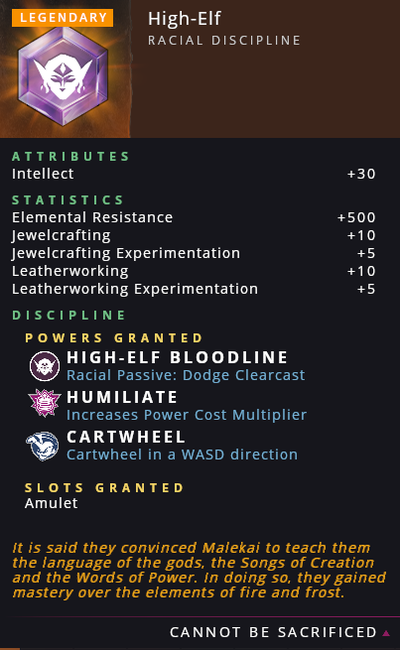