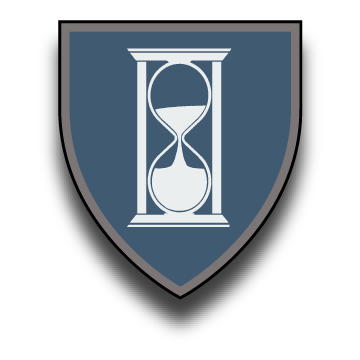 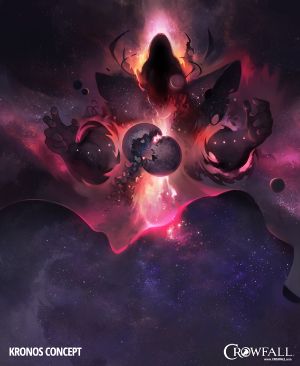 Kronos is a god in Crowfall and known as the Lord of Time and brother of Valkyn and Yaga, father of Malekai.

Brother to Valkyn (the All-Father) and Yaga, Kronos is perhaps the most inscrutable and unapproachable of the Gods. It is said that he sprang into existence the moment that the All-Father knotted Lyessa, the Serpent Mother—thus forming the arch of the Five Heavens, setting Time into motion and beginning the First Age.

Nothing is known of how Khronos came to father Malekai, Prince of Shadows. Out of shame or malice, the Lord of Time seems largely contemptuous of his (presumed-to-be) sole heir.

Faceless and formless, Khronos appears in the dreams of mortals and the visions of madmen. Some say his face is pure darkness, others tell of an empty (or endless?) void. To gaze upon him is to witness the moment of your death, to know that your end is coming and that you are powerless to stop it.

Silent and brooding, he observes the realms of man with a timeless, disinterested gaze. Kronos sees everything: judging each moment, witnessing each life, yet never involving himself in the affairs of gods or mortals—with one exception.

On the death of Gaea, when the Heavens rang with a deafening crack—a sound which echoed like the blow of hammer on anvil—those who looked to the sky could see that the Moon was shattered.

And behind it, the shadow of a shadow, was the faint silhouette of Khronos the Watcher.

This is the question of bards and astronomers: What happened that day? Was it he who broke the Moon? Or was he merely there to witness?[1]