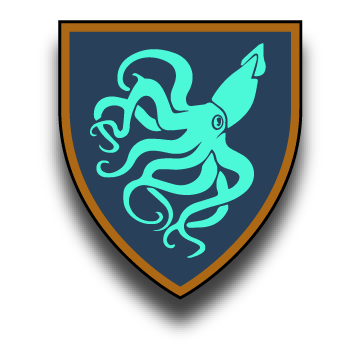 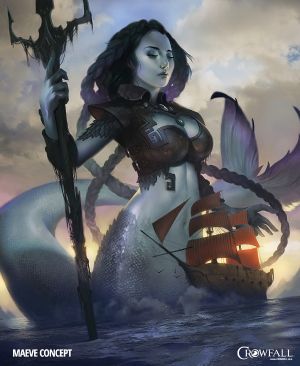 Maeve is a goddess in Crowfall, also called Empress of the Sea and goddess of War.

They call her the Empress of the Sea, Daughter of Carnage, the Tempest Queen. Maeve is the Goddess of War and the Ruler of the Oceans. She glories in conquest; in combat she has no equal. The undisputed master of the blade, not one of the Gods could stand against her in single combat and survive.

Maeve is third-born of the All-Father, behind the twins: Arkon the Sun God and Kane, Lord of the Moon.

Her domain is that of water: Ocean, River and Storm. Bequeathed at the time of her naming, Maeve feels bitter and cheated, for she sees her birthright as vastly inferior than that of her heaven-bound brothers. (There is some truth to this, for her Realm is in fact anchored to the mortal realm of men.)

Maeve has a general disdain for her siblings and an undying hatred for her half-sister, Gaea. Maeve swore to end the Earth Mother, and—even in the wake of Gaea’s death—seems tireless in her efforts to destroy her. The waves are her troops—an eternal procession of soldiers sent to assault Gaea’s domain, to crumble rock and stone and pull the earth beneath the ocean’s surface.

She is quite vocal in voicing her claim to the Dragon Throne, which she believes should be held by “the strongest and most worthy”. Maeve is dangerous for her martial skills give her an edge over any other single claimant—but in this one regard, all of her siblings are united.

As a group, they stand against her, for the reign of Queen Maeve would bring only suffering; her anger is legendary and her grudges eternal.[1]