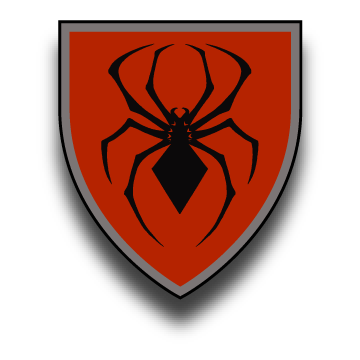 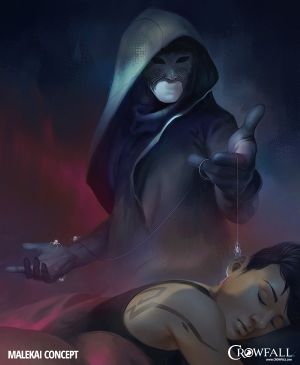 Malekai is a god in Crowfall.

We call him Malekai, and he is the Lord of Shadows, of Dreams and of Secrets.

It is said that he was once a trickster—a poet with words of silver, prone to moments of sly humor and biting sarcasm. His father, Khronos, found no humor in his tongue, and so he removed it.

Voiceless, the Jester God lost his merriment. Tongueless, his whispers manifest as pale white spiders. These words are his children. Messengers and spies, they scurry in shadow, eager to do his bidding. In dark corners they dance on threads of moonlight. They watch and they listen.

Few are chosen by the Prince of Shadows. He sends his children to burrow and nest in the mind of the sleeping. The victim feels a scratching, a murmur at the edge of their thoughts. Promising. Tempting. Taunting. An endless barrage of doubt and temptation.

Take what you want.

Weakness is the only sin.

Without me, you are nothing.

The line between madness and fanaticism is impossible to discern. Once infected, resistance falls quickly.

Mother Church has a means of cleansing the impurity, burning the agent out of the mind of the infected. Few survive, of course.

Those who do cannot say which is worse: the disease or the cure.[1]