The Ranger is one of the playable classes in Crowfall. The Ranger underwent a lot of changes and now belongs to the many available classes in the game, after the concept of archetypes was abandoned by the Developers. With the massive reveal on May 18th, 2017, the Ranger now can be played by several races, too. 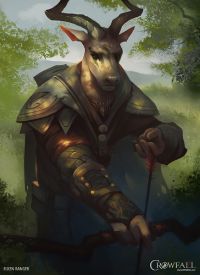 I hate the bloody cold.

You get used to the wind, the silence, the desolation. The burn? Aye, it’s bad. But when you stop feeling it – notice a sudden warmth in your fingers, your toes, your ears – that’s when you have to worry.

We are the Warders. Protectors of the Light. Heralds of Winter. I know! Bloody heroes, right?!

When a World is ready to give up its final breath, bleed out the last of its warmth... when there is nothing left but the graves and the ice and the Hunger… we go back. We go back for those too stubborn, too dumb or too weak to leave.

A few of them, we save. Most we put to the sword, or feed to the fire. If that’s the only way to save them from the Hunger, we burn em and shed not one tear of regret.

To be blunt, most men haven’t the stones for it.

I don’t give a damn for the Gods. I fight to keep the flame alive. The weak, flickering ember of Life…

It is ours to protect.