The Templar is one of the playable classes in Crowfall. The Templar underwent a lot of changes and now belongs to the many available classes in the game, after the concept of archetypes was abandoned by the Developers. With the massive reveal on May 18th, 2017, the Templar now can be played by several races, too. 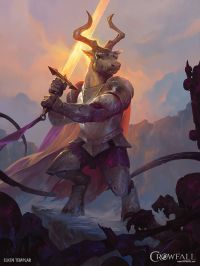 Once I dreamed of being a Princess. It didn’t work out.

My mother passed when I was thirteen. I remember that bed – the smell of lavender over the stench of decay. I wasn’t there when they burned her body. They hoped to spare me from seeing her stand up or flail around.

I see it anyway, when I sleep.

Father tried to marry me to a noble, but I wouldn’t have it. The Church was desperate, any who could afford a horse and armor were knighted on sight. We were the first females sanctified since the Beggar’s Crusade – but certainly not the last.

The sickness that took my mother was spreading. Farms, villages, even cities were lost – or sealed off and burned to keep the Hunger from spreading. Did we even slow it down? I still pray for the living, for the innocent souls we trapped inside.

Those were hard days, full of sweat and ash, death and steel. I take pride in that work. Even as my world crumbled, I did my best to fight the Hunger.

I fight it, still. For my mother, for my father and for the World that I once loved.