Thralls are the spirits of fallen warriors and craftsmen, which remain after the living have fled the Hunger. Unfinished matters make them still linger around in the world, keeping them from passing on into the afterlife. If they find not a way to flee, they will be devoured by the Hunger. One duty of the players (or the "Crows") is to offer these spirits salvation, in giving them a chance to serve the gods for some time and then being released into the afterlife.

Thralls have different stats. Some make great guards, crafters, trainers, or are powerful bound spirits locked into weapons or armor. Of course the thralls are afraid of the Hunger, but they also will try to break free from their enchantment. Art+Craft is still working on this feature. 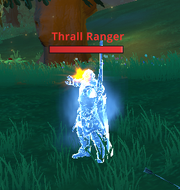 How to capture a thrallEdit

Usually, Thralls like to wander the places they used to live in when they were alive. Players will find these spirits in the Campaign Worlds and will need a Soul Gem to capture the souls. There probably will be also different soul gems.