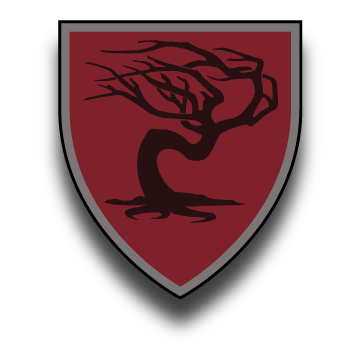 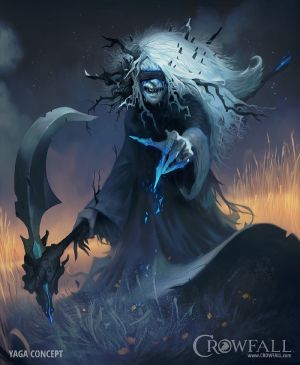 Yaga is the goddess of magic in Crowfall.

As one of the siblings of the All Father, Yaga manifests a foundational aspect of the universe itself: Knowledge, All Things Known and Unknown. She is the embodiment of how-things-work, the underpinnings of reality. The patron goddess of magic, she is often depicted as an aged hag in a long brown robe with dry, withered branches for limbs and a tattered scarf bound across her eyes. The scarf is a manifestation of her ailment—namely that she cannot see the present, only the past and the future. This limitation makes her interactions with mortals seem at once both cryptic and terrifying.

Yaga is also commonly associated with death—but not as judge or executioner. She is merely a collector, the embodiment of the natural and inevitable conclusion to the cycle of life. By tradition, all life begins with Cybele (sowing), blossoms into the realm of Gaea (growth and prosperity) and eventually concludes with Yaga (reaping). This is why she is commonly shown as a reaper or harvester.

It is said that Yaga appears to mortals at the moment of death—to collect their dying breath—and that she can hear, within those final gasps, a lifetime of memories and sins. She pens these into the Book of Whispers, to hold safe until in the End of Days when each mortal shall be judged by the gods and held accountable for their actions.[1]