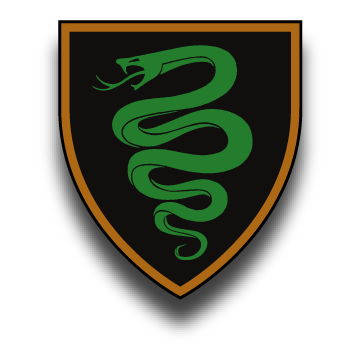 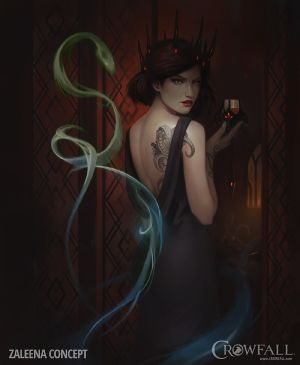 Zaleena is a goddess in Crowfall, known as Daughter of Snakes, a child of Lyessa.

Zaleena is unique among the gods, for she is not of the All-Father’s bloodline. She is of Lyessa’s brood, stolen by Malekai and hatched from a dragon’s egg to be raised as the trickster god’s own daughter.

A creature of the night rarely seen in the daylight hours, Zaleena cloaks herself in shadows and arranges her assignations after midnight. She commonly takes the form of a sensual woman with dark hair and hazel eyes. Her most notable mark is the serpent inked on her pale skin; a sorcerous tattoo which moves seductively around her alluring figure, winding hypnotically about her curves and scintillating like water under the light of the moon.

Beautiful and tantalizing, Zaleena relies heavily on her looks and her sorcery to influence the actions of gods and mortals. It is commonly said that her tongue is wicked and her kiss is poison—driving strong men mad and weak men to an early grave. Equal parts charming and cruel, Zaleena is known to lavish affection on those who do her bidding and to extract petty vengeance on those who displease her.[1]